"Yellow Dog Democrats was a political term applied to voters in the Southern United States who voted solely for candidates who represented the Democratic Party. The term originated in the late 19th century. These voters would allegedly "vote for a yellow dog before they would vote for any Republican"."......taken straight from the gospel aka Wikipedia...hahaah 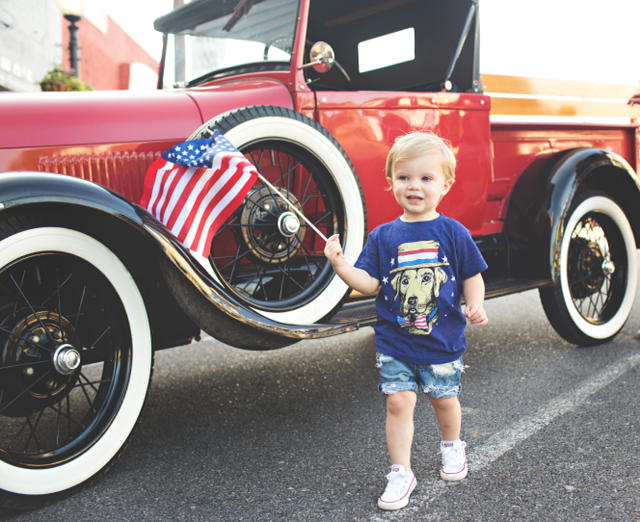 Im pretty sure my favorite American History teacher~ Mr Warner~ taught us about this term back in my junior year of High School. Correct me if I'm wrong, but I believe the Democrats wayyyy wayyyyy back then, were really like the Republican party now in their views!! Right- Tommy Perkins??
Regardless, we wanted to give a new spin on the old term and created our own #YellowDogPatriot.

We really do try to stay out of politics but everywhere you turn, it is Trump this or Hillary that...Honestly, Im not real pumped about either of them.  I think if I had been given that same question in the recent Miss USA Pageant, I would of just avoided answering the question too. My VOTE would be for Old Yeller!!!

The shirt design went through a few phases. 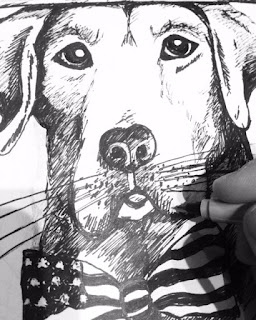 We actually worked on it a couple of months ago. 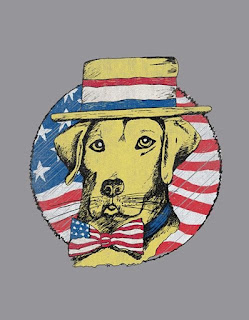 I wasn't head over heals on the initial design and it just sat there in a holding pattern for a month until I got back on it. It didn't "Wow" me and I didn't really like the Dogs eyes.  So glad we waited and tweaked it. More lines and details were added to the dog's face, his eyes were fixed too and the flag behind him was deleted. Now, it is now one of my favs and one of our kids favs. 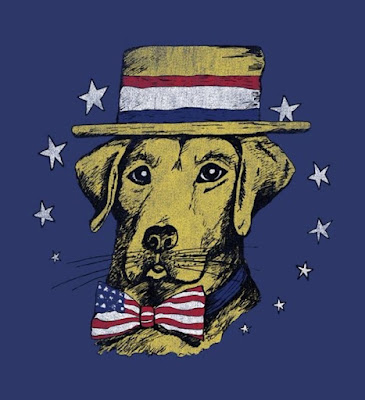 Phoebe informed me that the Yellow Lab's name is "Harry". So funny! We have zero dogs named Harry- just a two black lab mixes named Penny and Leroy.  I like the way her almost 3 year old mind thinks.

We set up a shoot with the famous "Baby Tuck". Baby Tuck really isn't a baby any more, but this is how Phoebe and Pearson affectionately refer to him. 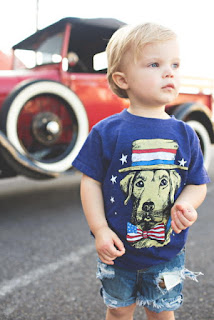 Tuck McGee is actually going to be 2 in September. Our kids have always loved him and have watched him grow up at Miss Dee's Montessori School where they have been attending since they were 16 months old. They even have baby dolls at home named Baby Tuck. :)
Tuck has beautiful blonde hair just like his mama Amber. And Amber, well... 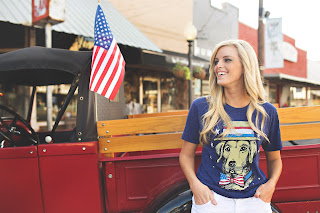 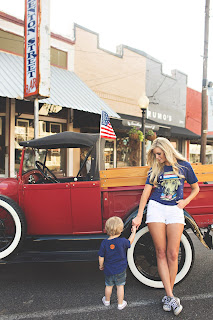 She has been cross fitting for 2 years now and is also a fellow teacher. Walt, the daddy/husband, is a  handsome guy who also teaches out at Ouachita Junior High. 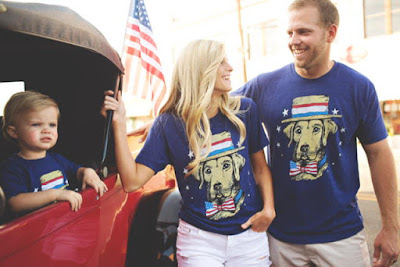 When I was envisioning this photo shoot, I wanted an old vintage feel and immediately thought of my friends, The Hays. Ginger and Hardy Hays have a bunch of old cool cars. Their garage is a car lovers dream come true. 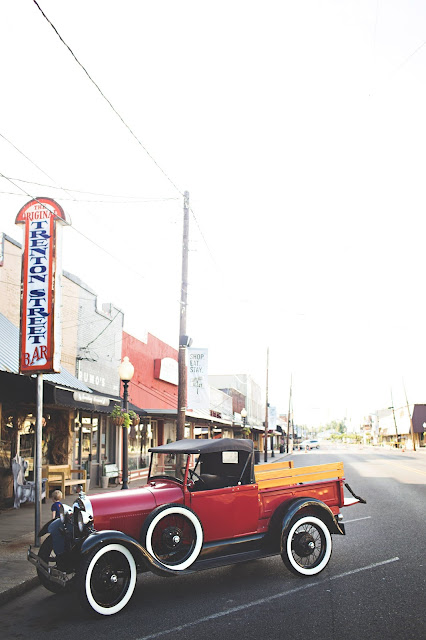 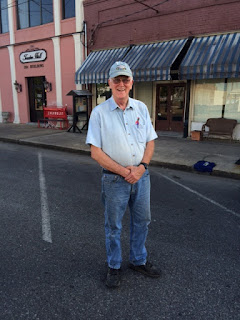 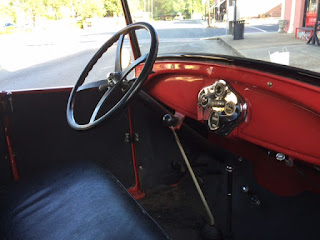 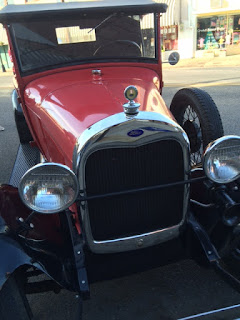 And the Fabulous Heather Land was doing the shoot. So thankful for her calming demeanor and cool vibe. We had initially wanted to take pics by the Ouachita River, 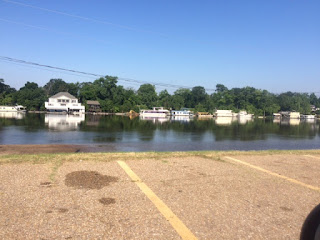 but the water was still too high and the view wasn't happening. So....We decided on Trenton Street and were surprised to see the Road blocked off on a late Sunday afternoon. 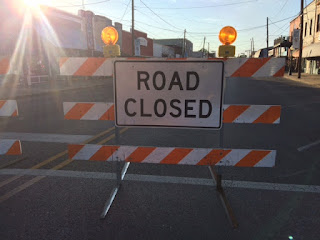 Everyone thought we had this done for the shoot!! 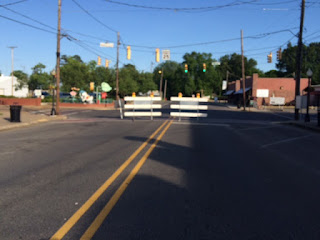 So Funny!! I wish I had that kind of power that I could just call ole Mayor Norris & the City and let them know that Mr P's needed all of Trenton Street to be clear for our shoot. HAHAHAHA (I later came to find out that this was done for Arrow Public Art and their big first medallion painting at the intersection of Trenton and Natchitoches Street. Great job Brooke Foy and Emery Thibodeaux!!!! ) 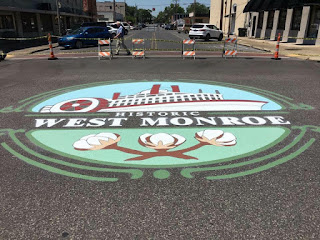 Baby Tuck honestly was not impressed by our shoot. 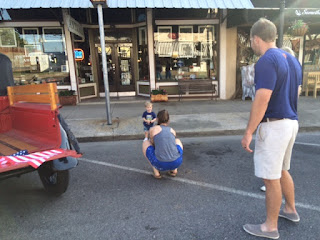 He was a little upset and only gave us some smiles when he thought a train was coming or when he got to honk the truck horn. Heather was a TROOPER with him. She played with him and put his little mind at ease. 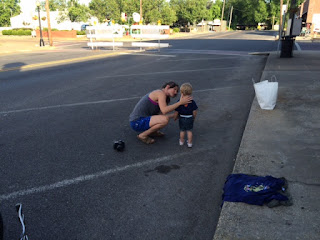 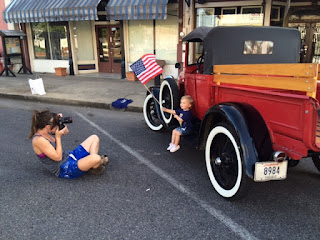 Now let me tell ya, Amber looked AMAZING in the Yellow Dog Tank just standing there in the street with the wind blowing her skirt and hair .... How can freaking beautiful is this photo??!?!??! 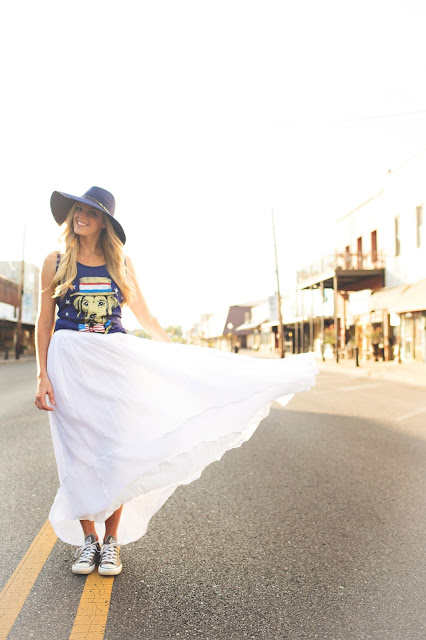 And a little close up... 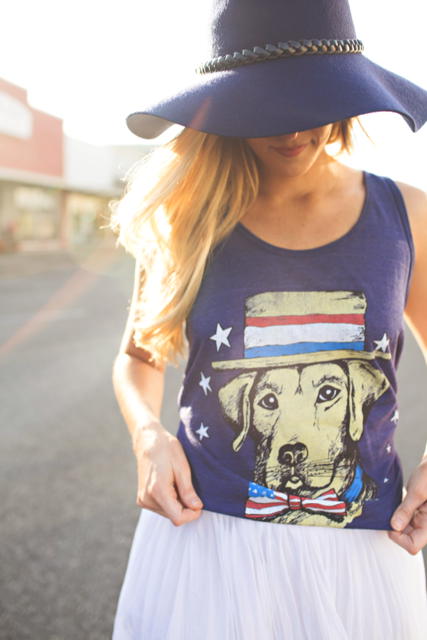 I had grabbed that white flow-y skirt and blue floppy hat for her from Ksera Boutique in West Monroe, LA to wear with the tank. 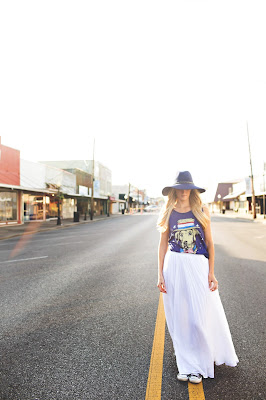 I loved the the whole look. And Walt did great posing by the truck too. 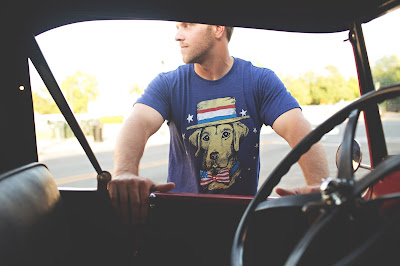 Big thank you to the McGee family for doing this shoot for us. It is def a big group effort to make one of these shoots happen. 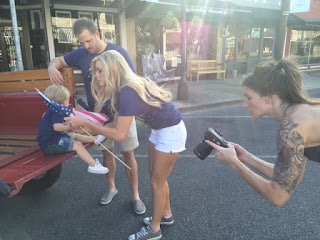 (and for Mrs Jane who came and helped too!) 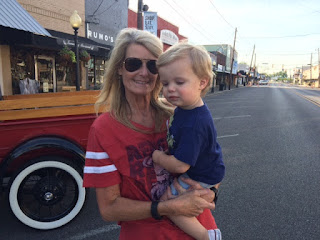 We realize that Little kids LOVE to dress up and match their parents. I know I will be sad when the day comes that the Two P's do not want to dress like me. 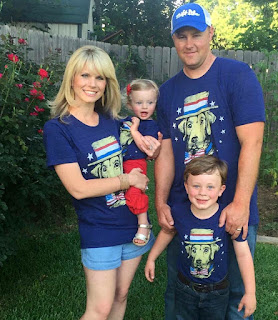 So.... these tees and tanks sold ULTRA fast for Memorial Day... www.mrpstees.com. They are now back in stock and ready to ship in time for July 4th.... 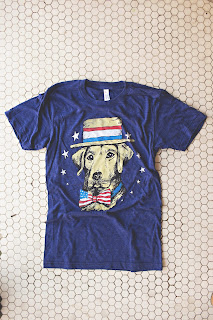 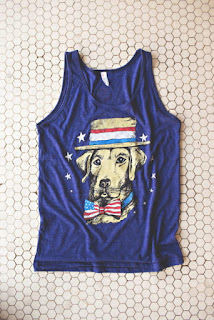 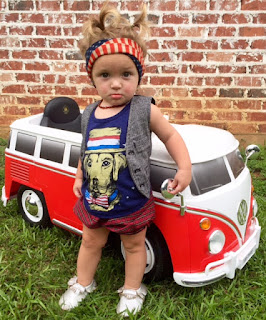 And handsome little Regan in a 4t Tank 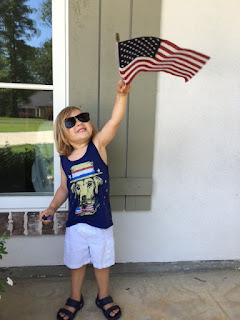 Thank you for reading, & Happy countdown to the 4th!!


"Let us not seek the Republican answer or the Democratic answer but the Right answer. Let us not seek to fix the blame for the past~ Let us accept our own responsibilty for the future."